HXSJ J100 mechanical keyboard - "half the money at the fair"

A true chronicle of a “professional” gaming keyboard.

It is a great pleasure for us to be able to enjoy the pioneering J100 keyboard again, as there are barely 7 customer reviews of this product on Gearbest. Here’s a real novelty here that wants to stand out from the crowd with its bold design - isn’t it wonderful?

It’s worth clarifying right at the beginning what exactly makes a keyboard mechanical, at all, why is it good for us? In this type of solution, a (micro) switch with a separate spring is mounted under each button. This results in an increase in the path of the key when pressed, the feedback of the keystroke is much more pronounced because we hear that tiny click when the switch is activated. By definition, mechanical keyboards are somewhat louder than their traditional counterparts, and such a high number of switch applications is certainly available on the price tag. The advantages are durability, ghosting freedom (it detects several keystrokes at the same time without any problems), repairability (in case of a problem we only need to replace the damaged switch), fast and precise communication. Nor is it incidental that, according to experts, due to the long keyboard distance and the less defined lower point, the mechanical operation is also good for our fingers, and the joints are less stressed.

It may be interesting for players in the blood that the detection point of the mechanical switches is roughly halfway down the keyboard path, so we can handle the signal input somewhat faster here compared to the membrane version. Of course, it’s a very small time gain here, nonetheless it’s a fact that professional players like to win every millisecond, and there’s obviously a good reason for that.

HXSJ shared unheard of little information about this, based on the available data, we believe that Cherry MX Blue switches are busy with our present hero. If our assumptions are correct, you should consider the following specifications:

We stress that at this point we are also uncertain, the manufacturer was not too talkative about the switches.

It’s so typical of color-smelling (literally), completely out of the way for the best design award, with typical signs of mass production on it. It doesn’t appear because of the modest picture quality, but I think the keyboard illustration came in the form of a sticker on the box. I don’t know how you feel about it, I don’t tend to cause sleepless nights like that anyway, so I quickly overcame it.

From the 35-button design, it was already conceivable that we would not be dealing with an average item. Indeed, this so-called one-handed form will not be a dream of typists, much more recommended for those who also measure driving speed in FPS. The HXSJ J100 is a great example of any point of view anyway; If I imagine it is placed next to a universal computer, so it is used for both gaming and work, then I have to say that it will rob some space from the desktop. Luckily, it doesn’t take up a lot of space, but it’s obvious that we just have to pack up somewhere. On the other hand, if I connect it to a specifically playful machine, the situation is already very different, since in this case, due to its one-handed design, it even increases the space available to us. Well, so one could argue at length about how practical the basic concept itself, this not-so-unusual design, is in terms of space utilization. We believe the HXSJ made a mistake at this point: the palm rest cannot be removed!

Years ago, a palm rest keyboard turned (or under) in my hands, compared to that, I got used to it here in an hour. The HXSJ J100 sits on rubber feet, so despite the 360-gram weight, there were no stability issues. Due to its one-handed nature, it was not unexpected, but it was a very practical and joyful phenomenon how much free space developed on my desk in a matter of moments. After some deliberation, we've come to the conclusion that the J100 is sure to make you feel good if you have a wireless keyboard nearby - you can put it aside in the blink of an eye when you switch to gamer mode - and it can do a good job with laptops. , because it is very likely that the built - in row of buttons does not provide such a gaming experience as we can bring together.

We have good news because anyone who can turn on a flash drive will do well with this device as well. You plug in, wait a few seconds, and you're ready to go! There is no driver, nor is there macro support, but at least it shines nicely! We have no less than eight modes, and the pace and intensity of the light effects can be adjusted, so you can play with it pretty well. We’ve made a brief taste of it so you don’t miss out on the experience either.

In our experience, the switches did their job reliably, really briskly, the pressure intensity seemed the same for each key. It also soon became clear that the HXSJ J100 was really unconsciously loud, I don't think in the evening hours of a panel house that the lower neighbor knocked it out to confirm this fact… Seriously: I'm used to a more or less quiet keyboard, so compared to that the difference was strongly audible. The place of the click-through can be felt anyway, so we would only have more feedback if the keyboard had also received a speaker. No interruptions were observed at any of the switches, and the backlight was not disturbing at all. The paintings were surprisingly solid, the design can't really be called ostentatious, we only get our heads up to the not-so-ordinary size. The USB cable is not stocked, it is of the harder type.

By definition, this unique design was created primarily for FPS, TPS, and possibly MOBA games, not in any way that requires the use of arrow keys. Now, I could say that since I’ve been using this gadget, I’ve been finishing in the top three in every game ever since - in fact, like Chuck Norris on the three degrees of the podium at once - but that wouldn’t be true. For me, any change to the input peripheral requires a long learning time, and that’s what I feel is one of the weak points of the J100. In the case of a laptop or a machine used purely for gaming, the situation is different, but on a PC that runs in an all-rounder role like mine, there are sure to be question marks; ultimately, two keyboards would have to be used at the same time.

We’re probably not revealing a big secret by being able to really capitalize on the virtues of the HXSJ J100 mechanical keyboard where a well-established keyboard isn’t available, or we’re severely short of space. Windows 10 handled the newcomer without any problems (parallel to the old one), we didn't experience any burning problems with the quality of the product - the lack of a macro can be remedied with software - maybe the removable wrist rest would have made sense, or some extra light effects they would have taken it in good name. Since this is a fairly special product, actually a target device, it is obvious that we cannot recommend the J100 to everyone. We think this time, depending on the above, you have to judge whether this keyboard is worth that much money for you.

The HXSJ J100 is currently available for purchase on Gearbest (click on the picture!) For only $ 21,99 (on sale!). If you have any questions, don't hesitate to ask! 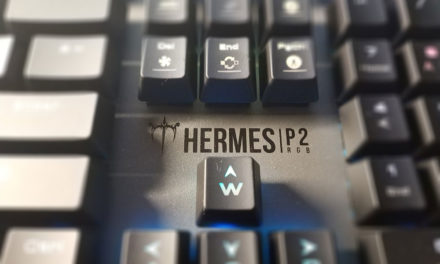