A typical last mile means of transport, i.e. from P+R to work! Microgo offered two devices for testing, the M8 and the M5. The latter is larger, more powerful, and even comes with a phone application, but I decided on the small and cheap M8 without hesitation, not by chance.

Electric scooters, and scooters in general, were invented to ride a few kilometers within the city, or to go into the city by car as long as it's convenient, and from there we can continue our journey with a scooter.

Either we run to buy our dinner, or we go to the cinema, or we go to the bus, to the subway, cross the city, and then we jump on the scooter again to cover the last kilometer or mile (mile) to stay with the first sentence of the article. So definitely not for rollerblading 40-50 kilometers. Of course, some people have this need, most of us don't.

The scooter is good because you can jump on it and go 1-2-3 kilometers with it without getting tired. Then we get into the elevator with him and go up to the office. Or we take it down to the subway, then when we are back on the surface, we do the last 4-6-10 street corners no longer by bus or tram, but by scooter. Well, strange as it may seem, most of the scooters available today are not suitable for this purpose, or are not very comfortable to use. Because the scooters have become bigger and stronger over the years. We can travel greater and greater distances with them on a single charge, and what's worse, they are also becoming heavier.

A bit of unnecessary competition has developed between manufacturers, but the technology does not allow big differences between individual products for the time being. Thus, striving for the maximum, more and more people can cross the Danube with the many 350-watt scooters designed for 30-40 kilometers, the weight of which barely exceeds 20 kilos. And 20 kilos is not enough, especially with the relatively large sizes. It is hard to find one that is small, light and easy to use. And, above all, it's cheap. Now you can probably understand why I passed on the Microgo M8 and why I wasn't interested in the big and heavy M5, which is approx. just like 90 percent of the average scooters available today.

This will be a short chapter, because there are not many accessories, and the installation is just a few screws.

The box in which the scooter arrived is the smallest I have had this year. Maybe it was only the KugooKirin S1 Pro tested last fall, which has a similar structure, but it costs a lot more, it costs HUF 154 in domestic stores and HUF 130 in foreign stores. Everything in the box is in exemplary order, there are no complaints about the protection either, most of the interior is made up of Nikecell impact protection. Next to the scooter, we find a charger, a charging cable and a small bag with some screws, an Allen key and an information booklet. It is a slight disadvantage that the charging cable comes with a Chinese plug, but fortunately it is a simple razor cable that can be purchased for HUF 100-200 in any technical store with an EU plug.

It doesn't take much time to assemble, everything is bolted on except the steering wheel. All we have to do here is connect a cable, then fasten the steering horn with four screws, and the scooter will be ready to go!

As I wrote above, the Microgo M8 is a decidedly small device, but I would like to add that it is not uncomfortably small. In other words, the plate we are standing on is the right size, exactly 15 x 50 centimeters. The wheel size is 6,5 inches, of course we can talk about puncture-proof tires at this size. The height of the steering wheel is 87 cm, but not from the pavement, but from the platform. 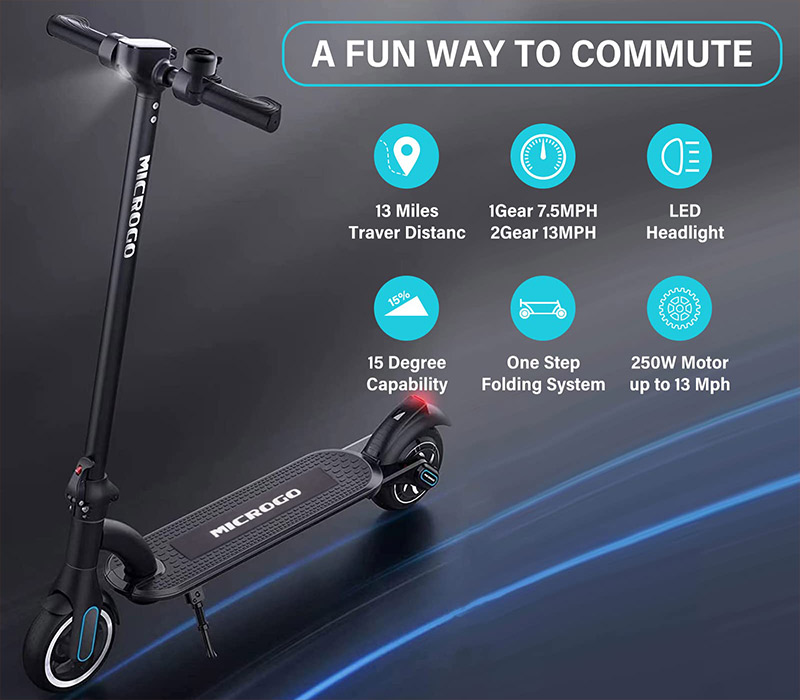 What is also very important is the weight of the scooter, the Microgo M8 is only 12,5 kilograms!

The electrical system, i.e. the drive train, looks like this:

The motor is 250 watts, the battery is 36 volts and has a capacity of 5 Ah. The charger is 42 volts, so it takes roughly 3-4 hours to charge from zero to 100 percent. Due to the small battery pack, the range is 12-18 kilometers according to the factory data, blindly, relying on my experience, I say that it will be good for 8-10 kilometers, but the truth will be revealed during the test. The manufacturer says that you can overcome a 15-degree slope with Microgo's scooter. I would be very surprised if this were true, maybe 10 degrees is still conceivable. It is gratifying that there is IP64 protection against water and dust, which means that the electronics are protected against splashing water. Don't try to rollerblade it under water, it won't work. 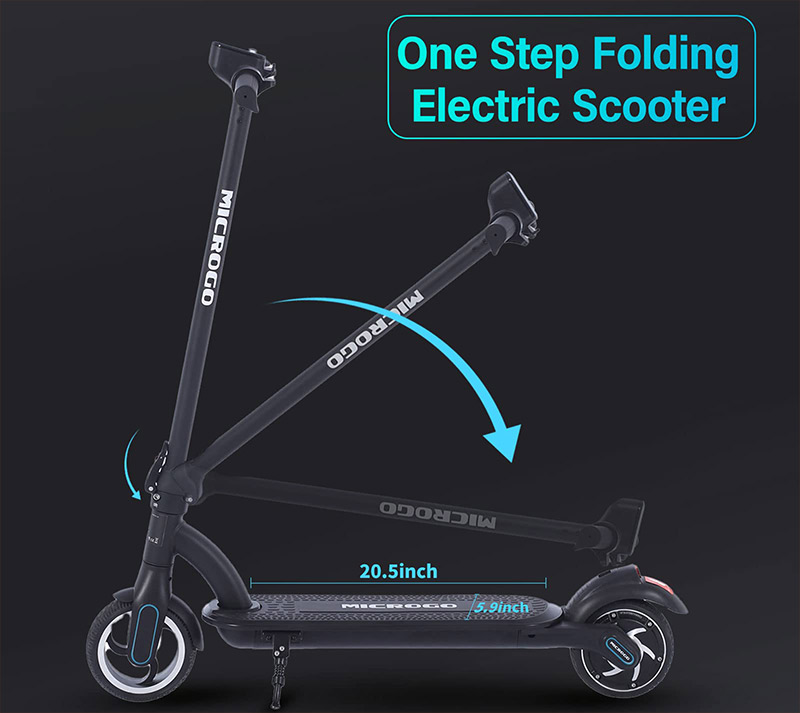 I haven't mentioned three things yet, the artificial wall, the lighting and the brake.

The instrument panel is a very good piece, it is hidden in the middle of the steering wheel when it is switched off. It can also be used in sunlight, although in this case you have to squint your eyes. We can see the charge, speed, whether the light is on or off, and whether we are in normal or "sport" mode. The lighting is perfectly fine. There is a usable light in the front, and a red position indicator on the rear fender. This is also the brake light, the light changes to flashing when braking. The brake is the usual electric solution on smaller scooters. Fortunately, the M8 is rear-wheel drive, so the braking power is also applied at the rear, which is good because we don't fall over the steering wheel when braking. If the electric brake is not enough, then the manufacturer, like traditional scooters, has put the rear fender down and can be pressed onto the wheel, so you also get a mechanical brake by stepping on the fender. 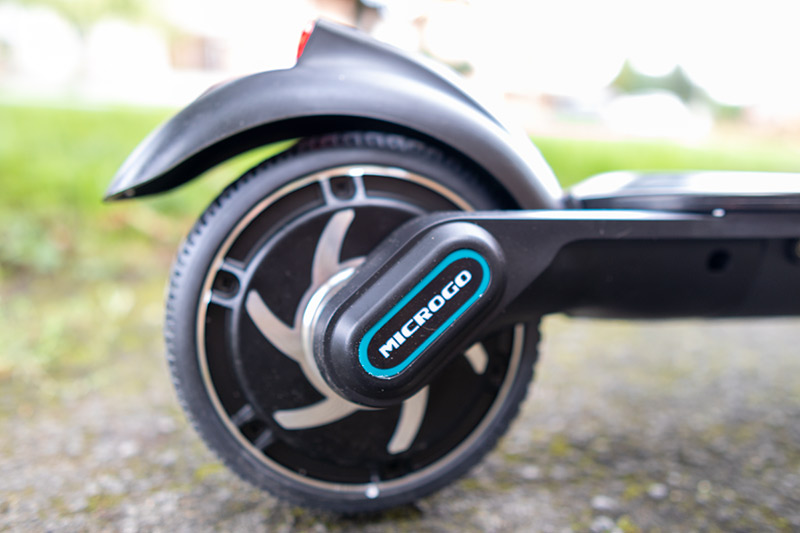 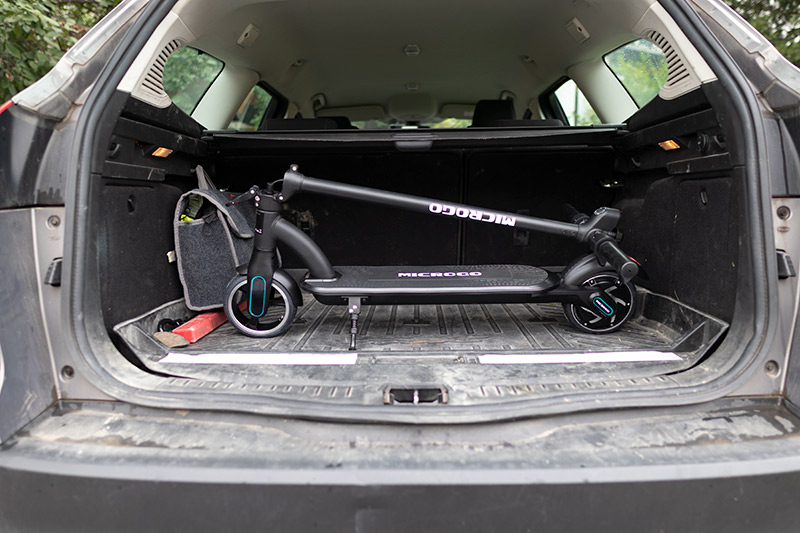 This will again be the most important chapter of the article, as it is here that it is decided whether the given product is worth buying or not. I tell you, it's worth it.

Let's start with range and top speed. Well, according to the manufacturer's data, the Microgo M8 has a load capacity of 81 kilograms, but I'm a total chump, so it's a bit overweight for the M8. At least that's what I thought. Then it turned out not so much. 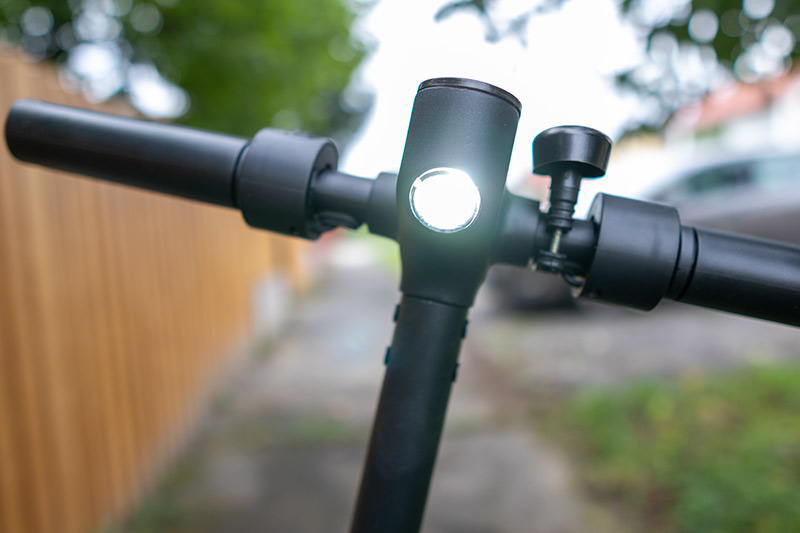 The M8 was able to reach a maximum speed of 20 kilometers per hour even with my weight, even if it was not relaxed, and it was even able to maintain it. It's true, the power delivered decreases as the battery drains, so it went 20-15 kilometers per hour at 18, close to zero when fully charged.

The range, as I expected, did not reach the value specified in the factory data. Of course, this is not a miracle, I mention again that I am 20 kilos heavier than what was given as acceptable at the factory. At the same time, if I didn't destroy the scooter, the 6-7 kilometers would have been even with the excess weight, and this is completely acceptable from this scooter. The climbs, however, as you might have guessed, are not the friends of the M8. It should be said to its advantage that it is so light that it is not difficult to push it, even uphill.

I was also not surprised that the M8 shakes. I mean, not like electricity, but like a scooter without shock absorption. The wheels are also small and tubeless. The Microgo M8 feels good in the city on the high-quality paved bike path. It is not suitable for cars, it is not suitable for frozen, rutted asphalt. So far, except for the top speed, everything has been as I expected. It was definitely positive that 20 kilometers per hour remained available!

What was definitely positive was that, despite the low price, the Microgo is not one bit behind the more expensive machines in terms of assembly quality and material use. It feels great to use, everything is in place, it doesn't want to fall apart, it doesn't creak, it doesn't squeak, the whole structure is absolutely positive. I would even dare to call it nimble in its kind. Of course, it's not like a 500 or 1000 watt, but it can definitely start well. If we are in the single mode, it runs pretty smoothly (up to a maximum speed of 12 km/h), but in the dual mode I was surprised by its agility, I expected less.

On a straight road, even at a speed of 20 kilometers, the engine brake was sufficient. So it's good that the rear fender is there as a mechanical brake, but I think you'll need it most downhill. And what really surprised me (especially because I didn't see it in the specification) is that it also got the Microgo M8 cruise control. If you hold the throttle in one position, a small odometer will appear on the display after a few seconds, and the scooter will continue at the previous speed even without pressing the throttle, of course only until you touch the brake. Of course, I was also curious about it, because on the one hand I have never owned such a typical last mile device, on the other hand nowadays even a simple scooter costs many tens of thousands, so it excited my imagination to see what the technical content is that can fit under HUF 100!

Well, luckily I wasn't to be disappointed. The Microgo M8 exceeded my expectations in almost every way, but it didn't disappoint in what it didn't. The assembly and the materials used are exemplary. The M8 more or less knows what the manufacturer promises, if you are lighter than me, maybe under 80 kilos, then it is easy to achieve the range specified in the brochure with some tailwind and slope.

However, it doesn't hurt to clarify again, this scooter is not intended to compete in terms of range with more expensive devices, because, as I described above, it was not invented for that.

In my opinion, the manufacturer has balanced the dimensions, the battery pack capacity and the weight of the scooter well, and the end result is a means of transport that can be used comfortably even by adults, which perfectly complements or, on shorter distances of 5-6 kilometers, perfectly replaces the public transport. If you feel that you need this instead of bigger and heavier scooters, you can buy it by clicking on the link below. The scooter can be ordered from a German warehouse with a short delivery time and free delivery. No need to clear customs. The price with the coupon code AA702776B987 is HUF 96 here: We tried it - KugooKirin S4 electric scooter, the sea of ​​peace The cheapest electric bike is incredibly cool, we tried it!