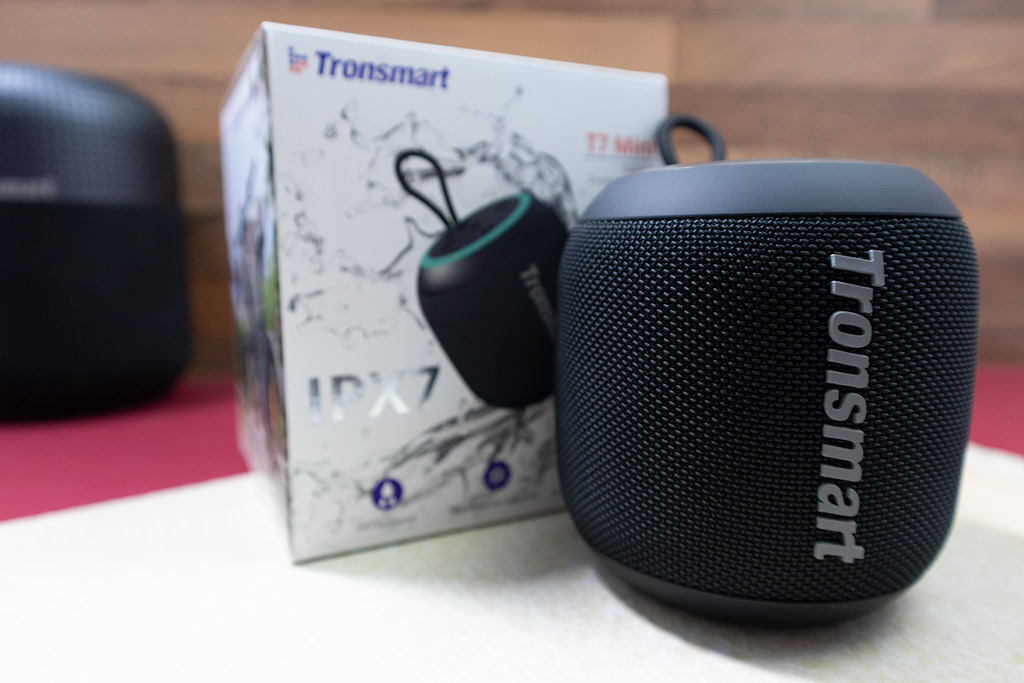 Great sound comes from this little thing, it was worth trying!

I have been testing Tronsmart products for quite some time, but for some reason the smaller speakers have been out of my life until now. Now I asked the distributor what he would say if I tried them, and even that afternoon two small speakers were sent to me.

I couldn't help myself, I opened the T7 Mini, which seemed more interesting to me, first, so in this short test I will write a few sentences about it!

Ever since I've been testing Tronsmart products, I've always been amazed at the quality of the packaging. Here, of course, you should understand that the manufacturer uses such demanding materials for the boxes as well, which we are not used to at this price level. 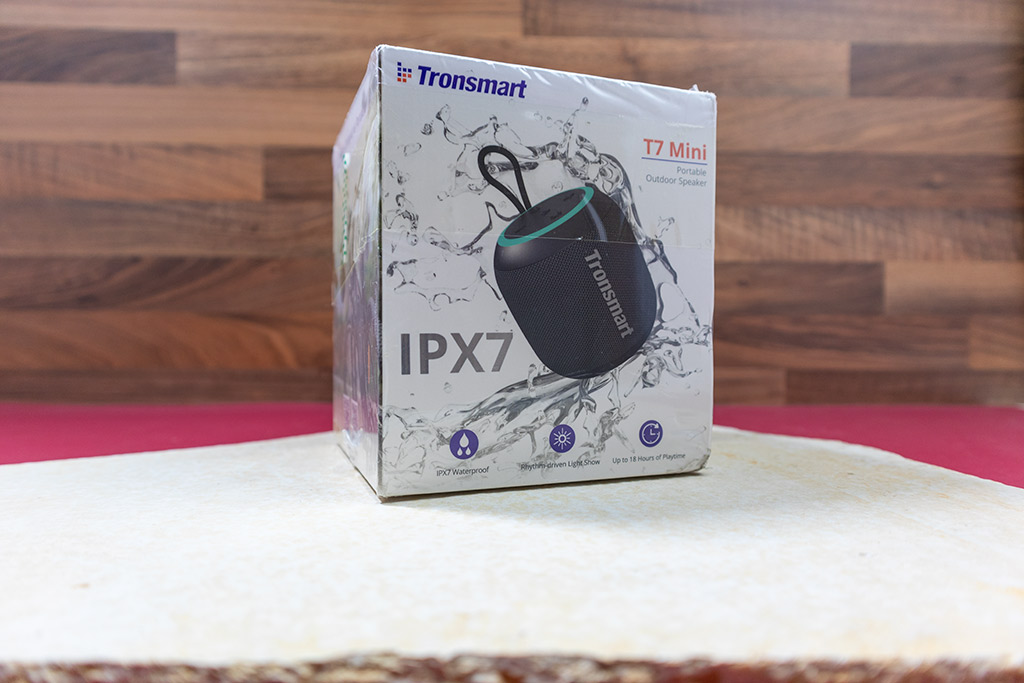 Thick cartons, flashy graphics, adequate amount of data, in many cases even the cover with magnetic closure surprises us. Well, the latter was not the case with the T7 Mini, but in everything else we got the usual quality from Tronsmart. 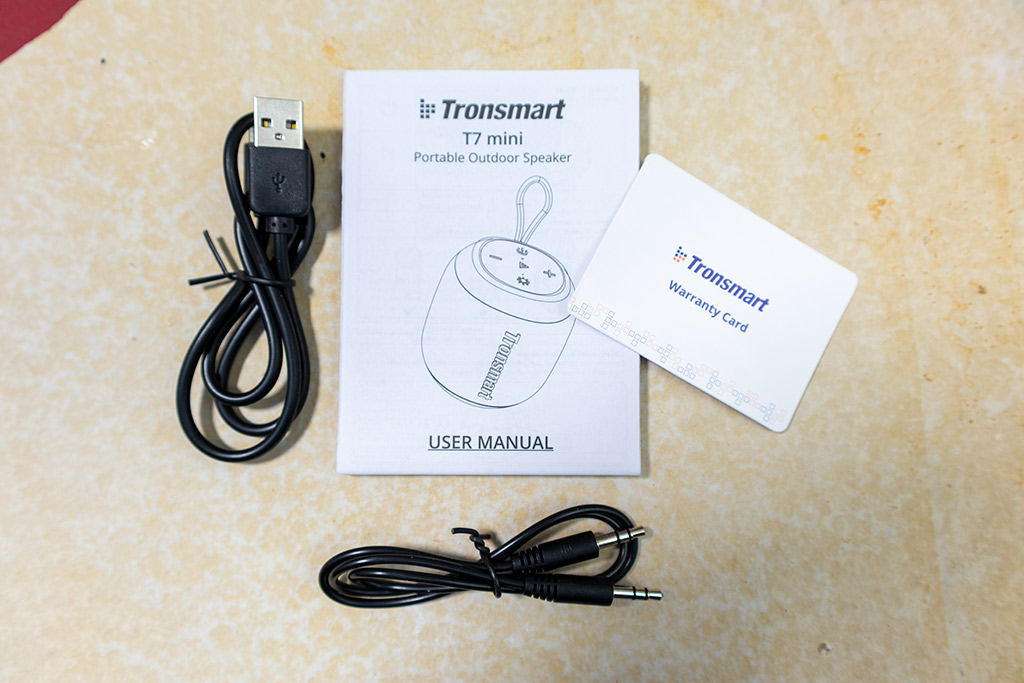 After opening the box, we get a smaller box, which contains the accessories. Well, don't expect too many things, because apart from the description and a small warranty card, only two cables fit in the palm of our hands. One is a USB Type-C, the other is a jack-jack. The former is, of course, for charging, the latter so that we can send music to the speaker via a cable.

The form was already familiar to me, but not in this size. I've been the happy owner of a Tronsmart T6 Max for quite some time, which is a bit bigger, a bit heavier and a bit louder. The Tronsmart T7 Mini copies its big brother based on its appearance, and not only in the barrel shape, but also in the fact that the controls are on the top of it as well. It is true that the T6 Max is touch-sensitive, and the T7 Mini has mechanical buttons.

The placement of the charging connector is also similar, which is behind a large rubber plug at the bottom of the speaker. Behind this is the opening for the memory card and here is also the jack connector. What is an important difference, however, is that in the case of the T7 Mini, there is an RGB LED strip around the cover that flashes to the beat of the music, or more precisely, a circle. 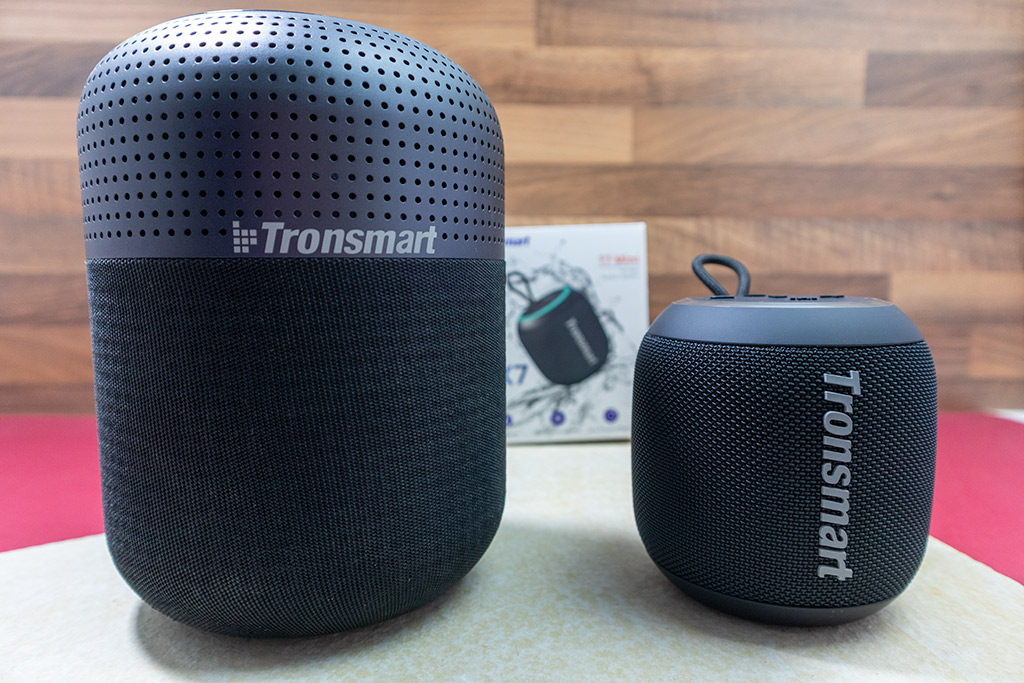 Another difference is that the T6 Max has a fabric cover, while the T7 mini is surrounded by a metal grill, which has the Tronsmart inscription made of rubber. The only thing I didn't mention is the small hanger, which, according to the picture on the box, can be used for e.g. the small speaker can be hung on the handlebars of a bicycle. Let's just say that I think the ear is small, but whoever wants to hang it here will come up with something clever! 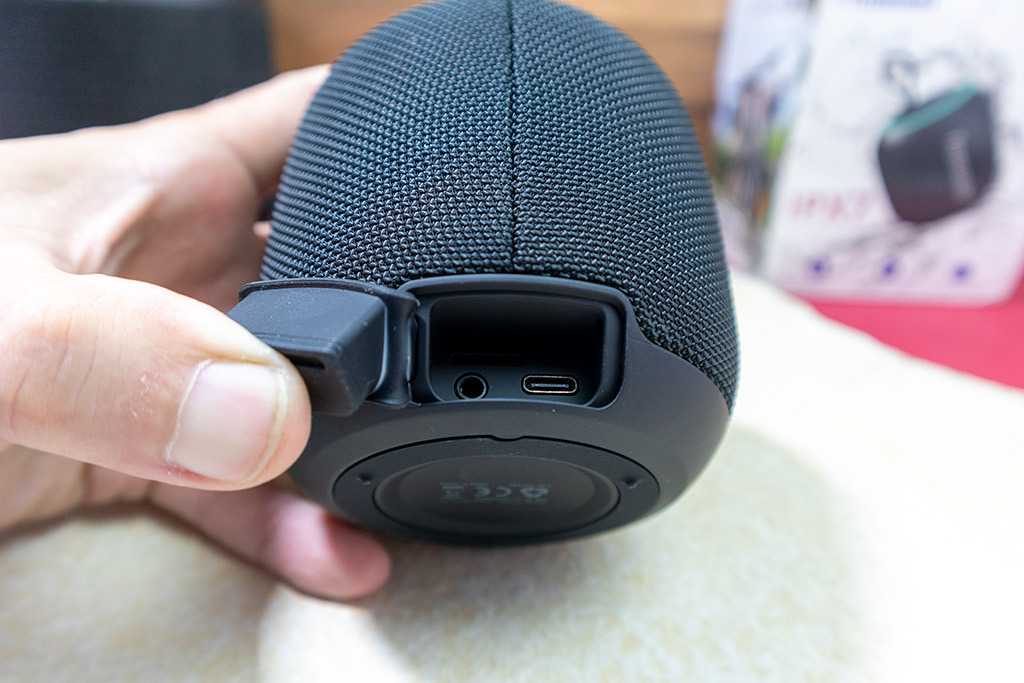 As the name suggests, the T7 Mini is quite small, although I can honestly say that I thought it was even smaller before I picked it up. Its height is 10,5, its diameter is 10 centimeters, and its weight can be about 40 deka. So it won't tear your hand off and it won't pull the bike's handlebars aside if you really hang it there.

From the above, it has already become clear that we can send music to it in three ways. Via cable, Bluetooth connection and memory card. Among the interesting features is the Bluetooth 5.3 connector, which is found in few devices so far. It is said that the wireless connection does not last up to the usual 10, but 18 dimensions.

Another interesting feature is the IPX7 water protection. IPX7 means maximum protection against water, which does not show the degree of protection against dust in contrast to IPxx markings. IPX7, on the other hand, knows everything, in theory it should last half a meter under water for 30 minutes. At the same time, showering is not necessarily good for him, because the water does not surround him, but "splashes" him, so be careful with this! 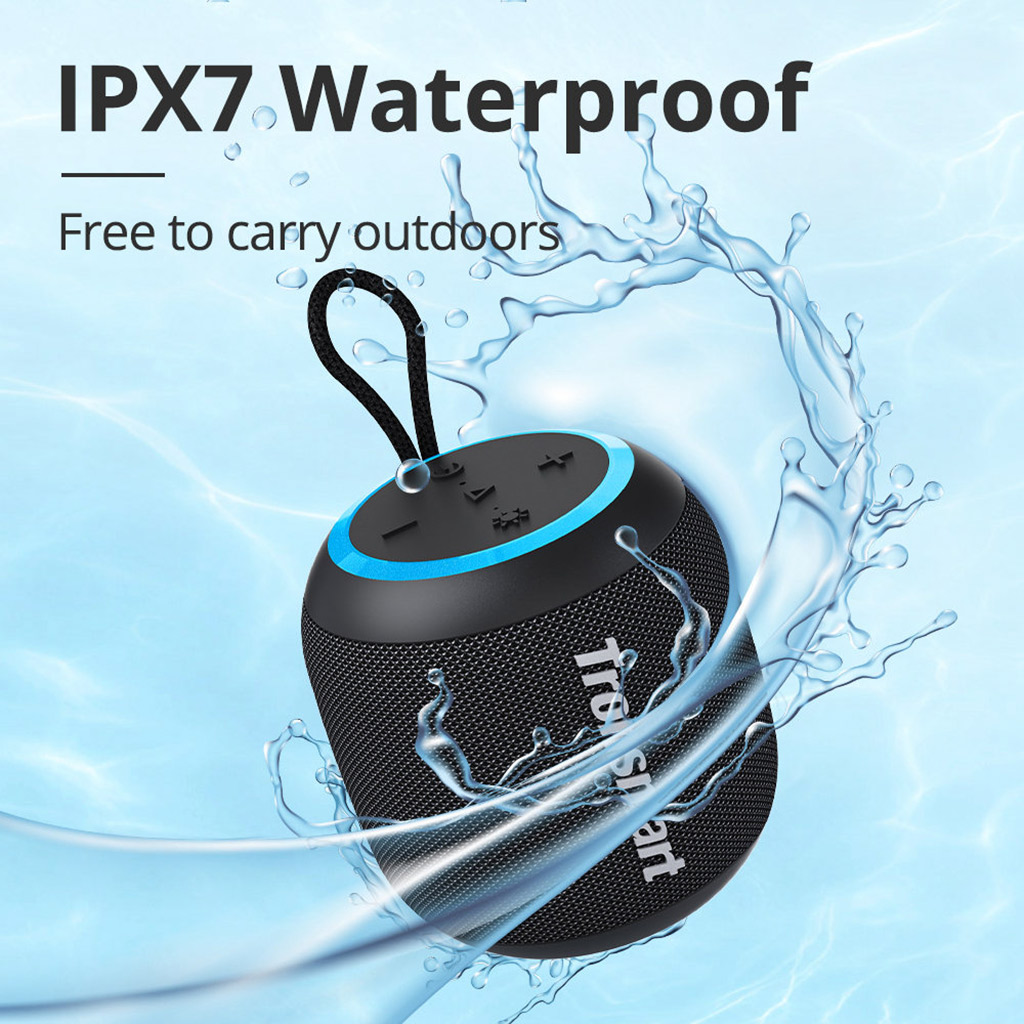 The manufacturer provides a power of 15 watts, which is considered quite good compared to the competition, which is mostly capable of 10 watts. The charging is done via USB, according to the factory data, the operating time is 18 hours with the LEDs off and 8 hours on. They don't say what volume corresponds to this operating time, but let's assume that the usual 50-60 percent volume was given.

Three more things that are unrelated, but I haven't written them down yet. A full charge takes 3 hours, the frequency range is between 20Hz and 20kHz, and we get support for Siri, Google Assistant and Cortana. This last feature assumes that there is a microphone in the structure, and we should not be disappointed, it really is!

Finally, a few words about the interior design!

Tronsmart masterfully mixes active and passive radiators in its speakers and speakers. This is no different now, forward, towards the Tronsmart inscription, an active radiator works, while a passive one works towards the back, the latter is responsible for the bass. The solution is good, the bass has no direction in the sound image, it is best if it reaches our ears reflected. 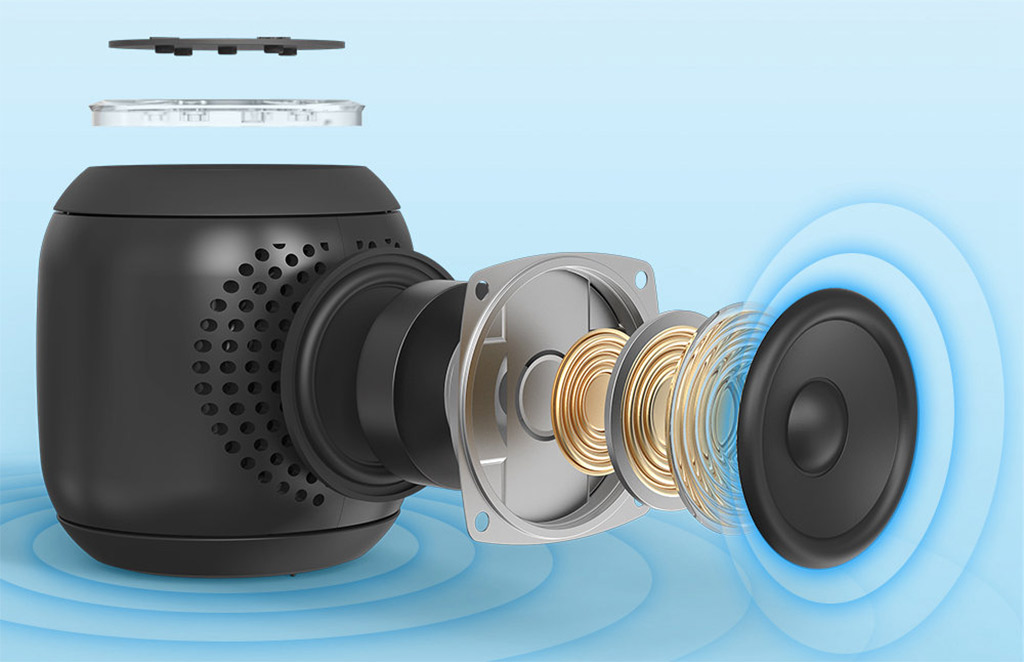 This makes it clear to everyone that the T7 Mini is not stereo, but due to its small size, it would have been almost unnecessary to manufacture it, because there would not be much of a stereo effect. However, there is a TWS function, with which we can connect two such headphones, and then the stereo will arrive!

I can report two negatives, one smaller, the other a bit bigger.

The small thing is that I expected a little more volume. I'm not saying that 15 watts isn't enough, Guns n' Roses is still playing here while I'm writing the article, and in order to concentrate on writing I even had to turn it down. So I can safely say that it is good enough for a small table speaker, but not enough for a party. Although, connecting two speakers…

The other problem, which is a bit more serious, is that I couldn't insert or remove the memory card, even though I don't have drawer fingers. It's so deep inside that I needed a small screwdriver to push it in and then remove the card during the test.

This will only be a problem for those who use a memory card, I just tried it for the sake of the test, anyway Bluetooth is always the winner. 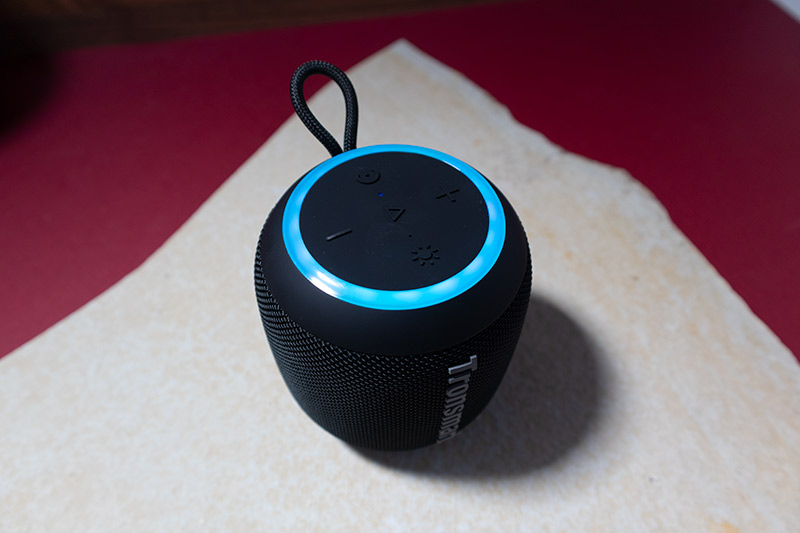 If it's a memory card. I've tried quite a few formats, let's say FLAC or MP3 usually play with me, the little one played those, but there was no problem with wma either. I would like to note that there is no point in listening to FLAC on the T7 Mini because it adds nothing to the enjoyment, stick with MP3 or use it with Spotify, as I did.

What's your voice like? Good! I tried quite a few styles, there was electronic music, rock, from the latter the trio of Motörhead, Guns n' Roses and Dire Straits was quite a big immersion. In addition to electronic music, acoustic music also came out nicely, although, as I wrote, the volume is not frenetic.

The woofer sounds nice, it doesn't push forward, and because of its size it doesn't move the air in our lungs either, but it can be heard and adds to the clear middle and high tones. In any case, there is probably the least of the latter, but what there is, the jingle, as it is prescribed.

The LED light is nice, but it annoys me, I can see the flickering constantly out of the corner of my eye. Although the light is not strong, it does not burn the eyes. So I turned it off, but I won't put it in the negatives, I'm sure there will be many people who will like it.

I can safely say that the Tronsmart T7 Mini is almost exactly as I imagined it to be. It is a little bit bigger and a little bit quieter than I expected, but I stress that these are not very important things. More importantly, his voice is very good. When I'm writing these lines, the Guns classic So Fine is playing, and I'm just noticing how clear and natural the vocals are. Love it! 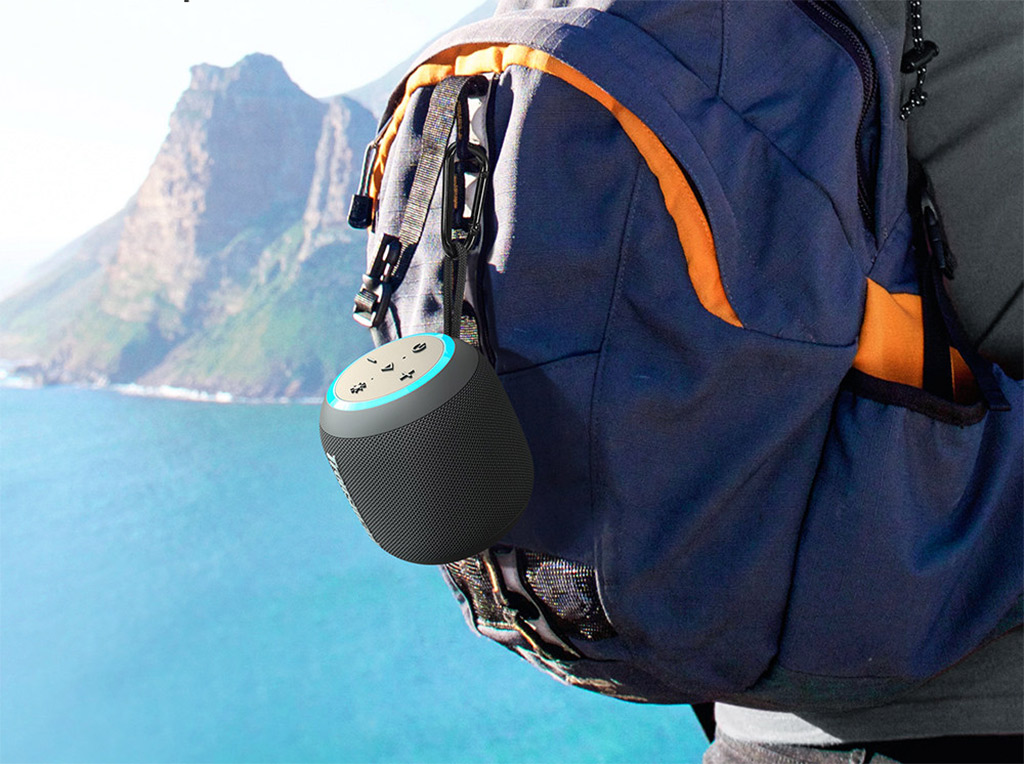 Overall, what can I say? That if you need such a small speaker, you can easily buy this one, you won't be disappointed! The price is great, the NNNT7MSEP with a coupon code from a Hungarian warehouse. You can buy it with a delivery time of 2-3 days, the price is HUF 12 today and tomorrow (September 300-2022.09.21, 22) instead of the original HUF 8300, and shipping is free.

HOW TO BUY WITH A COUPON AT THE GEEKBUYING STORE?

Open the product page by clicking on the link

Click on the "Buy Now" button, then in the lower left part of the window that opens, in the "Coupon" section, paste the coupon code and press the button next to the coupon field.

After that, you can press the "Place your order" button.

summary It's a perfect piece in every way, cheap, small, and sounds great. We cannot expect more from a mini speaker! 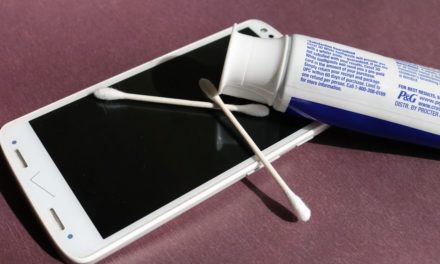 7 tips if you scratched your phone screen! 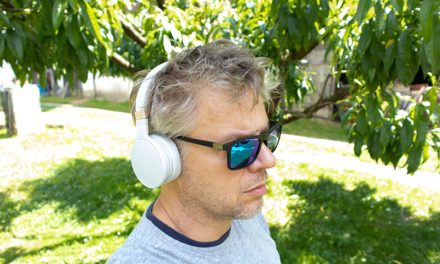 We've tried it: the 4 is the best BlitzWolf quick charger + 2 add-on Could it be one more? - 1MORE ComfoBuds Pro earphone test