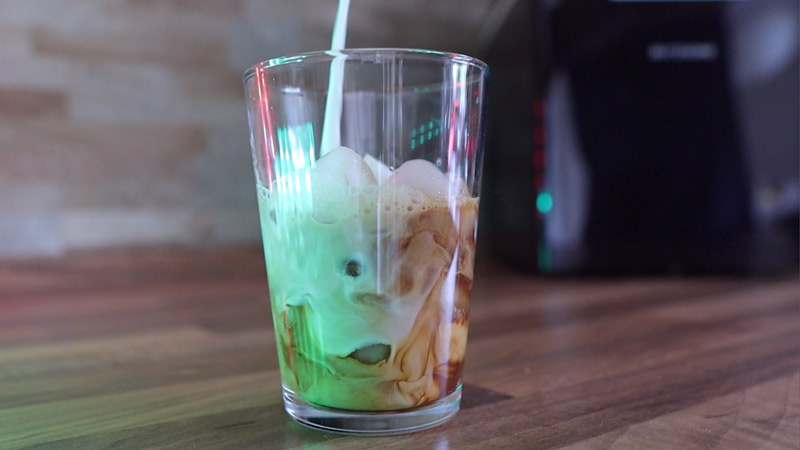 Are you still freezing ice cubes in the freezer?

contents show
1 Check out the ice cube maker in action!
2 Introductory
3 How does he look like?
4 What do you know?
5 How does it work?
6 What to use?
7 What can you do with it?
8 Summary
9 BlitzHome BH-IM2 ice cube maker

Check out the ice cube maker in action! 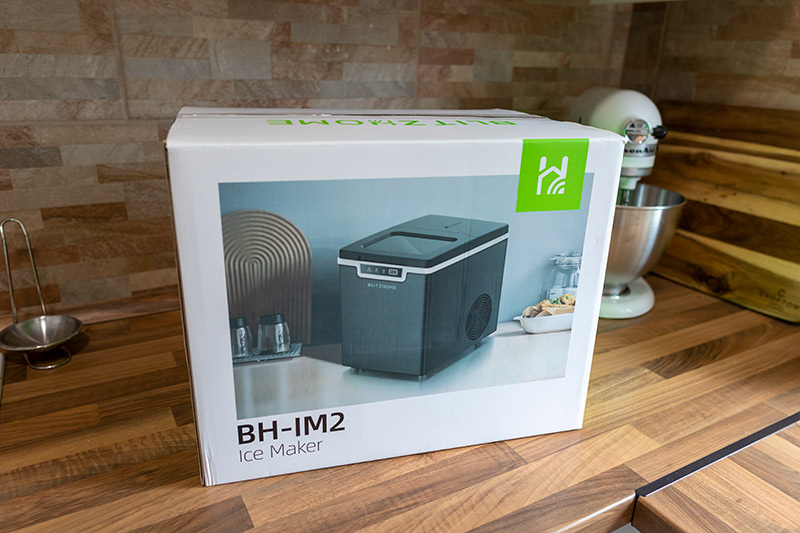 The thing is, for some reason, I lived in the belief that home “ice cube” making machines are expensive. I didn't even look at it like that. I’m not saying sometimes, especially in the summer, it would have been nice, because it was hard for my guys to make drinks and make fruitful ice cream. I hated the silicone ice cube makers that were available lately, somehow I always managed to pour half of the water into the freezer.

So I rarely made ice cubes, hell I didn’t miss the macera with the frozen water in the freezer box!

Then it happened that a BlitzHome (BlitzWolf) dealer asked me if I wouldn’t want to try a small but fast ice cube maker at home. I asked him how much it cost, he said the state fell, and I said, but if it costs that much, I would definitely try it! The BlitzHome BH-IM2 looks good. More specifically, a machine packed in a very jawy, glossy black cloak, the top of which can be opened, and on this roof we also find a small window through which we can observe the growth of ice cubes. 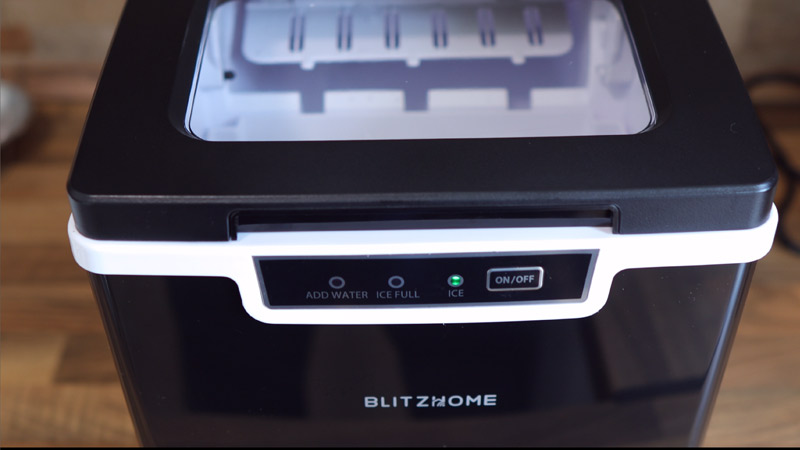 In front there are three indicator LEDs, next to them a piece of on / off button. Seen from the front, there is an opening for a cooling fan on the right and a drain plug on the bottom. Pretty much that, we find no other curiosity. What do you know?

The BlitzHome BH-IM2 makes ice cubes pretty quickly. This is not exactly an ice cube, but a small glass-shaped ice that is better than a cube because it comes in contact with the liquid to be cooled on a larger surface than a conventional ice cube of the same weight. The water tank of the machine has a capacity of 1,8 liters, the daily ice-making capacity is 10-12 kilograms. I'll write about that later. It takes 7-15 minutes to make one serving, or nine “ice cubes”. It depends on the water temperature, the outside temperature, the humidity, and so on. The machine is not smart, so we can't control it with our phone, but it would be unnecessary. We just have to turn on their stuff for as long as we want, then do a self-cleaning on it, drain the remaining water, and we’re done.

How does it work?

Making ice cubes requires cold, which is obvious, and it's so cold that a Peltier battery in a cheap cooler bag, for example, can't produce. This temperature will require a compressor refrigeration circuit, just like it is in a normal refrigerator. 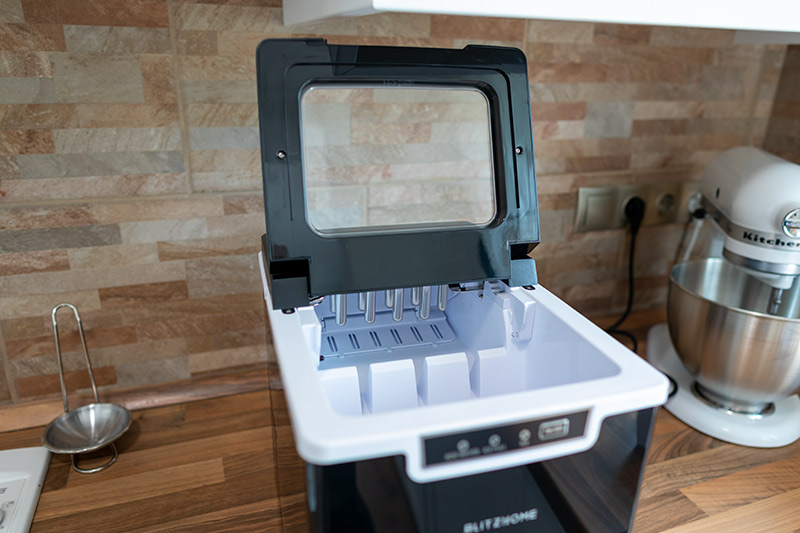 Such a cooling circuit consists of a compressor, an evaporator, a heat exchanger, a capillary tube and a filter. And of course the gas circulating in the system. The process looks like the compressor is compressing the gaseous gas, which makes it liquid, forcing this gas into the evaporator where it expands and evaporates.

Evaporation draws heat away from the environment and cools the interior of refrigerators. The heated gas, which has become gaseous again, passes through the heat exchanger, through which it releases the heat extracted from the kitchen air, enters the compressor again, and so on. 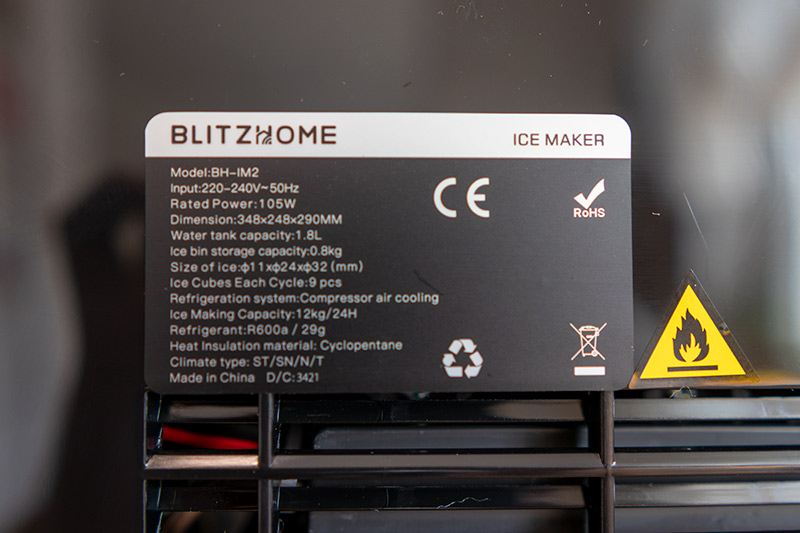 So the process isn't too complicated, and this heat-absorbed heat is also used by our ice-making machine, though the evaporator looks a little different than we've been used to in refrigerators, and an extra screw had to be added for normal operation. process.

The ice cube in this case will not be a cube, but rather a small cup. This is because the evaporator is essentially 9 small tubes with rounded ends that are immersed in water. The water will freeze on the cold beak, making it an ice glass. When the correct ice thickness is formed, the machine releases the water back into the collector. And here comes the screw. In order for our little ice cubes to get off the tubes, we need to give them some heat. So, the machine heats up the outside of the tubes for a moment, causing the little glasses to slip off of it, and our “ice cube” is done.

Well, in a word: simple!

The machine is actually a completely simple structure. As it turns out so far, all we have to do is turn it on, and when the removable ice cube collector is full, we take out the ice. As an extra, it detects and indicates with an LED when the water has run out or when the ice cube collector is full. In such cases, of course, it will stop working until you get water or pour out the finished ice cubes.

Extra extra is the self-cleaning function. You can start it with the push of a button, I did it before and after use, but it's not required. Let’s say a thorough cleaning before first use shouldn’t hurt.

I was a little afraid that since the compressor the machine would be quite loud. Luckily, it’s not loud, in fact, it works surprisingly quietly. You can't hear the compressor turning on and off, the fan on the heat sink is also very quiet, so you can use it in the kitchen, it won't be annoying. It’s loudest when the finished ice cubes are squeaking off the pipes, so you might think it really doesn’t have a lot of sound. 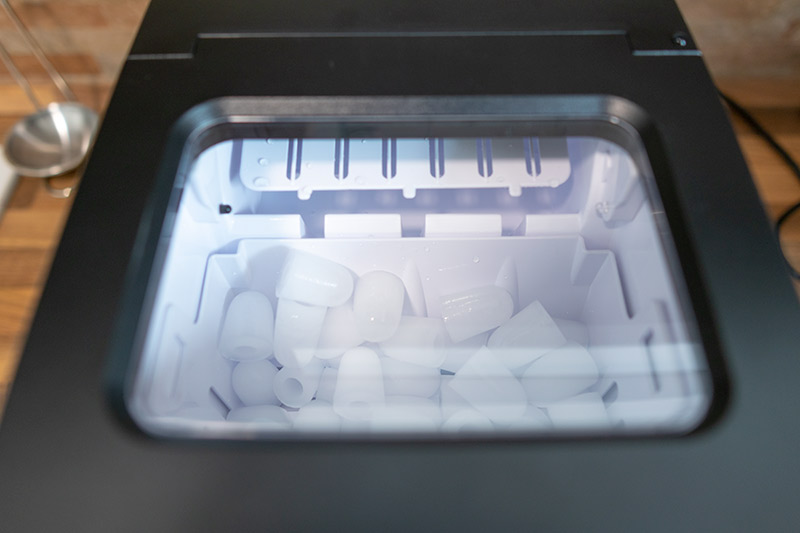 I promised above that I will talk about the amount and time of making ice cubes.

As usual, I looked at the speed at which cheaper machines available on the market could make ice cubes and how much of their daily capacity they were. Well, the daily capacity for each is 10-12 pounds, as with the BlitzHome BH-IM2, but the cooking time for a single serving of ice cubes is different. Not 7-15 minutes, but 9+ minutes.

Of course, I measured how long it took me to make a dose. The preparation of the first batch took more than 11 minutes, which may be due to the relatively high temperature of the water loaded into the machine. From the second batch, on the other hand, the cooking time was reduced to 7 minutes, all with the roof open and the temperature of the apartment at 23-24 degrees. I think with the lid closed, this time can be further reduced. What I don’t really understand is that with a 7 minute cooking time, the machine would have to produce more cubes than competing solutions, as they work 9+ minutes to make a batch. Still, the daily amount is the same. I suspect that here the prudence of the manufacturers is more in the background, they tend to underestimate the daily amount a bit before someone binds into them.

The point is that under normal temperature conditions, the BlitzHome BH-IM2 works faster than its classmates, making a dose in 9 minutes instead of 7+ minutes. What can you do with it?

Obviously ice cubes. I made a little ice cream during the test, a little ice cream (I put some cream and Greek yoghurt and minimal sugar in the ice cream, I further creamed it with the smoothie and smashed it into the freezer), iced coffee and of course I used it to cool the drink. The manufacturer also mentions such areas, but of course the use can only be limited by the imagination, for which you can or must use ice, you can use it. For example, if you head off your rake, you can use it to cool your forehead.

As I began the article, I will continue here in the last paragraph. Since I haven’t looked at the price of ice cube making machines so far, I’m surprised at how cheap it can be. In fact, right now, at the beginning of the summer, the idea arose at home that a similar structure, or if not one, an ice cream maker, should be acquired.

My guys are 4 years old and they love ice cream, but this year the prices have run so far that a family ice cream is already making a visible edition. So we thought about it, so this article came at a good time for me too, because that way I was able to try out such a machine without risking my own money. The fact that it worked well was not surprising, we have more and more BlitzHome (or BlitzWolf) machines in the kitchen, all of which do their job nicely. BlitzHome makes my coffee, I'm smoking with BlitzWolf, which I can fry without oil, BlitzWolf contact grill i make burgers. So I love these machines and now I love the BlitzHome BH-IM2 ice cube maker too.

I wrote above that the machine looks good, I don't think it's too big if we say it's stylish. In any kitchen or bar counter, there will be no place for anyone to look down on it. This machine is now exceptionally available from a Chinese warehouse, but using EU Priority Line shipping, the dealer does the customs clearance for us, so we don’t have to deal with it or pay an extra customs clearance fee. VAT is included in the purchase price, of course, so we don't have to deal with this either. The delivery time is roughly 2- two and a half weeks, so by the time the heat is here your ice cube maker will arrive too!

Use to purchase BGHU2135 coupon code, this will reduce the original price of the machine from HUF 91 to HUF 39 here: 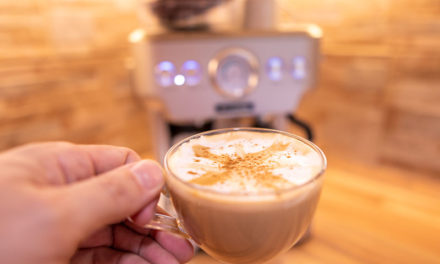