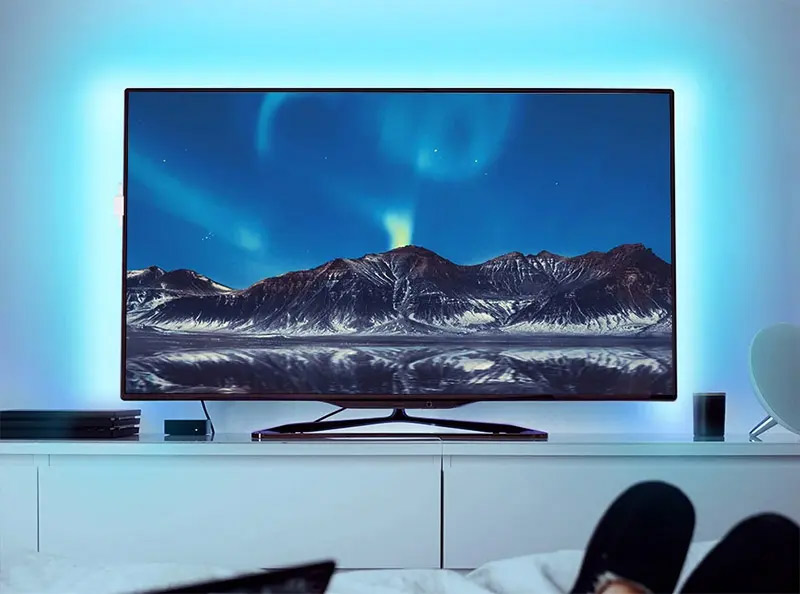 The Blitzwolf BW-LT32 is a smart backlight for your TV, which can be smart or silly, it will work with it!

My grandfather also put a small lamp behind the TV 40 years ago. He said it should be because our eyes are less deteriorating when we stare at the TV. And you know what, he was right!

The backlight is good because it reduces the contrast between the bright display of the TV and the black backlit background, making our eyes less tiring. Plus, because of the less dark background, we see colors as more contrasting, blacks appear blacker, deeper.

Of course, technology has evolved a lot in the last 40 years, but not only in TVs, but also in backlighting. CRT TVs that seem tiny to today’s eyes have been replaced by huge, flat panels that are also much brighter than they used to be on a Videoton TV.

The backlights also improved. For example, Philips Ambilight technology has been available for quite a few years now, which does not smoothly illuminate the wall behind the TV, but does so according to its dynamic colors on the TV screen. Ambilight’s lights almost magnify the display, it’s an incredibly good experience, it only has one huge flaw, it’s insanely expensive.

Many companies are trying similar solutions, of course cheaper than Philips. Some of these attempts work well, but only if you are using it for a computer monitor (Windows), for example, or if your TV has an Android operating system and non-copy-protected content is running on the display (e.g. Netflix). 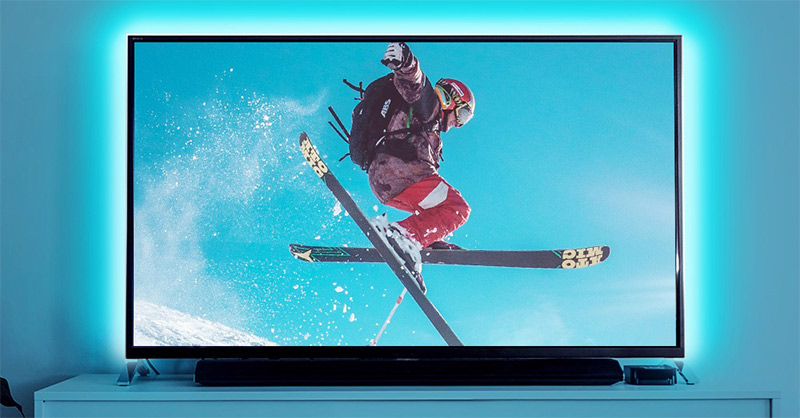 Blitzwolf is trying a whole new approach than before. The technology looks cheap and works on paper, is not limited by copy protection, and can be used not only on flat screen TVs, but even on old picture tubes. So, it doesn't matter if our TV is silly or smart.

The question, of course, is whether it can be used in reality. You get an answer to this article! The Blitzwolf BW-LT32 comes in a flat box. Opening the lid, you will find an LED strip on the top level to be glued to the back of the TV. This, of course, consists of RGB LEDs, i.e. colored, and the strip length is 2 meters. There are 2 LEDs on this 60 meter, which I think will be enough for the back of almost any size TV. 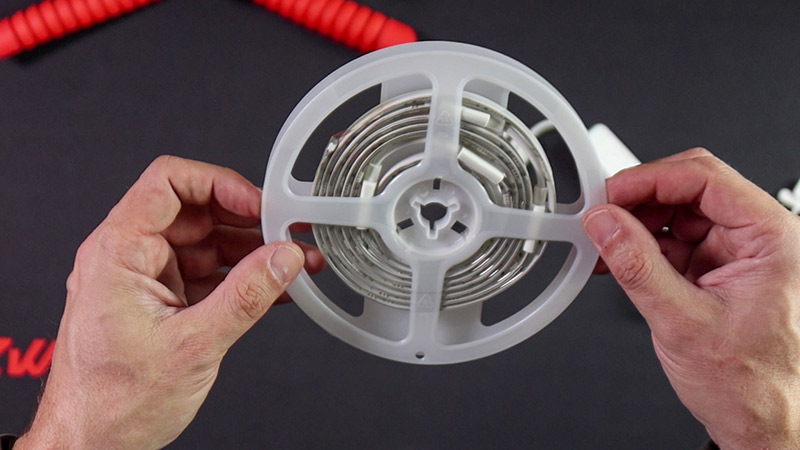 On the “shelf” under the LED strip we find the control unit in a bag and next to it a remote control.

Of course there are instructions for use, we don't get it in Hungarian, but there are English, German, French, Spanish, so you can get by. Paper form - or what the structure knows

So, what exactly do you know and how does the BlitzWolf BW-LT32 work? The first and most important thing is to somehow extract the color information from the TV image in order for the LED strip to glow with the right color. For this, Blitzwolf uses an optical sensor.

We need to stick the tiny sensor on the TV’s coffee so that the “camera can see” the TV image. Based on the color information extracted in this way, the LED bar can change its color dynamically, depending on what appears on the display. 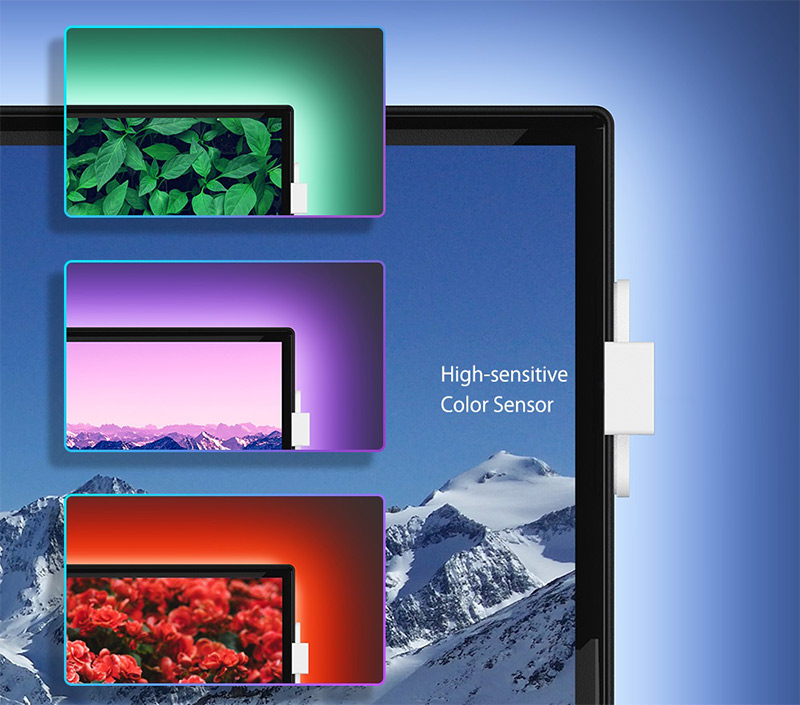 The downside to Ambilight is that the LED bar will glow the same color everywhere, but for some reason, if you want to swim from $ 500 instead of $ 28, let’s face it, it’s also much more than nothing. , or as an LED strip that is constantly lit in one color.

Anyway, with the remote control that came with the structure, we can also set fixed colors, and according to the factory description, we can also choose between 7 dynamic modes, but I will tell you how they differ in the next chapter.

The device gets its power from a USB port, meaning we either need to have USB on our TV or an external USB power supply, let’s say we need to use the charger of an older phone. 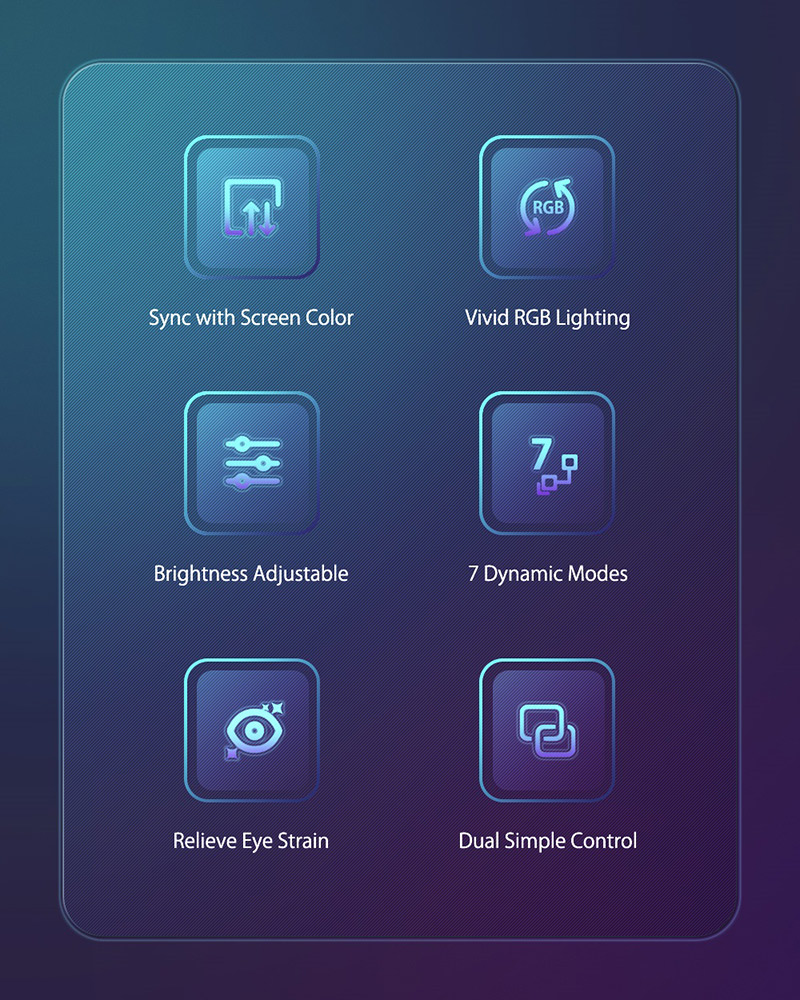 As I wrote above, we get 60 LEDs on the two meter tape. The tape has IP65 water resistance and the remote control has IP 20 water resistance. The latter would be more useful, but there is essentially no water resistance in the former, and if the tape is soaked on the back of the TV, if there is a good chance that the TV has also been shot.

The remote control works from a distance of 8-10 meters, the lifespan of the LED strip is 50 thousand hours. We don’t like to work in an environment warmer than 55 degrees anymore, but we don’t like to watch TV in such a warm anymore, so this is also irrelevant data for us.

I thought this was a short chapter because the equipment is very simple. However, life has intervened, which I am happy about afterwards, as I have discovered several pitfalls from which I can save you. The LED line is self-adhesive, you just need to glue it. What should be noted is that a short cable is installed in two places in the LED strip, which will be placed in the upper right and left corners of the back of the display so that the LED strip does not break in a bend. The sensor can be placed virtually anywhere on the coffee, the point is to “see” the display.

When you're done gluing, all you have to do is plug the USB dock into the TV, turn on the controller and the party can start!

There was a problem that gave me roughly 3 hours of extra work, but if you read that, you won’t have a problem.

I tested the sensor mode, that is, when the light on the LED bar adjusts to the content on the TV screen. To do this, I took out a Yeelight smart light, put it in front of the sensor, and played the colors nicely all the way through. Joy in the cube, it works, the colors of the smart light are followed by the color of the LED line!

After the test, I glued the LED bar to the back of the TV, plugged the USB plug into the TV’s USB connector, turned it on, and nothing happened. Specifically, sometimes the entire row of LEDs flashed with bright light. There were times that the flicker accelerated, there was that it thinned, but nothing else happened.

Separately, the colors were still lit, there was green-blue-red, all kinds of backlighting, only in the sensory mode the light was blinking. What was the problem?

In hindsight, things were simple, but it was a while before I realized. When the sensor mode is used, not only one color of the LEDs works, but essentially all of them with only different intensities. This is how the RGB LED produces plenty of hues.

If not just one color works, but all of them, the power consumption of the LED array will be much higher, and the TV's USB port will not be able to provide enough power for this. The problem went away right away as I plugged the USB connector into a wall charger I got for one of my phones.

Now that we’re past the more pulling part and got the LED array working, the experience of operation can come!

Let's start with the modes! I wrote above that there are 7 dynamic modes, well that’s not true. More precisely, it is only half because these modes are so dynamic that they alternate the color of the LED array. However, the colors have nothing to do with the content being played, so flickering, changing, is more annoying than pleasant.

Fortunately, it is not mandatory to use them, we are in any mode, we can return to the color information provided by the optical sensor by pressing the Sensor button. Sensor mode, on the other hand, works well. You need to figure out which coffee on the display to glue the optical sensor to. I put it on top, but I think it will be better in the middle of the right or left then because above a lot of times the blue sky is just on the screen (so the backlight will be blue).

If you don’t want dynamically changing lights, you can choose from 7 pre-programmed colors, or you can scroll through the colors, it seemed to me to have even more shades.

It is important that the light intensity is adjustable. This is also true for dynamic (sensory) mode and even, fixed light. You can also adjust the blinking speed for the blinking modes, but this didn't convince you to blink slowly or fast.

I also made an ultra short video about the operation, I think the recordings say more than a thousand words, check it out!

No disappointment, I got exactly what I expected. I knew that the entire length of the LED bar would be the same color, which means that there is no Ambilight experience here in such a way that, depending on the image on one side, e.g. the light is green and the other is red. What is gratifying is that he adapts to this quickly and accurately. It “hits” the colors nicely, and by adjusting the brightness, we can adjust the backlight to our liking to make the effect pleasant.

Pre-programmed colors are also good, if I’m more tired, I often turn on one of these (usually blue), take off a little brightness, and get a nice light behind the TV on the wall.

The stuff, anyway perfect for quality, in terms of packaging and material use, could even be Xiaomi, really quality everything. If you’ve read things about assembly, you’ll easily get over the difficulties and be happy to use the new composition. So the point is. Philips Ambilight is a great thing, but the $ 500 (~ 150 forints) I asked for it is a bit much for a TV backlight. Instead, here is the Blitzwolf solution, which is similar, knows a little less, but the price is roughly 7000 forints. Everyone can decide which one to buy, but it is suspicious that there will be more of us who will happily use the 7000 forints.

The Blitzwolf BW-LT32 can be ordered from a Chinese warehouse, but due to its price, when you buy one piece, it can be purchased duty-free for a few more months. For several pieces, EU Priority Line shipping must already be used for the seller to pay the customs duties on our behalf.

You can buy it here, use coupon code BGBWLT65: This has now been hit hard - AirAux AA-SAR3 soundbar test